How to Om at Home: Starting a Home Yoga Practice 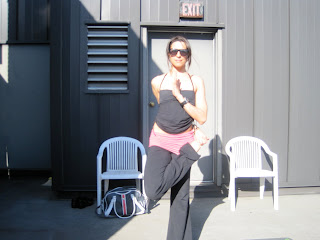 Having the ability to practice yoga at home, without the need for a teacher or studio, has many benefits, including convenience, cost-savings, and added creative license. Students often express an interest in practicing on their own, particularly while traveling away from their regular studios and health clubs during the summer months; however, they’re unsure of how to begin.

I believe that practicing solo provides yogis with essential opportunities for growth. Free from the confines of a structured class, a home practice allows for greater self-expression and deeper meditation. Here are a few suggestions to help you cultivate a knack for om-ing at home.
1. Start small. Many people are overwhelmed by the prospect of remembering or recreating the sequence of a 60 or 90-minute class, which is why it’s best to throw that idea out the window. Instead, start with 10-15 minutes. Your sequence can be as simple as 5 rounds of sun salutations and sivasana, or child’s pose followed by seated postures such as half pigeon, upavista konasana (seated straddle), and pascimottanasana (seated forward bend).
2. Create space. It’s important to create space for your home practice. This doesn’t mean you need to build a yoga room with bamboo floors and import a statue of Ganesh from India. Truth be told, your home might not have a separate room for yoga but rather a little space on your bedroom floor or a few squares of linoleum in the kitchen, which is fine. The concept of creating space doesn’t actually require much square footage at all– just enough for the length of a yoga mat and the height and width of your arm span. While in college, I once worried about not being able to practice yoga while studying abroad. I’ll never forget my ashtanga teacher’s response: You can practice yoga in a prison cell. Fortunately, I’ve never had to test the theory, but he’s right. The beauty of yoga is its simplicity. To that end, create an oasis for yourself by turning off all cell phones, computers, TVs, iPads, etc. Perhaps you light a candle to make the space feel serene and special. Your yoga space doesn’t have to be elaborate or elegant, just welcoming.
3. Play favorites. The most liberating part about a home practice is the freedom to choose your own asanas. In the beginning, it’s important to develop a sense of play on your mat. Don’t worry about the “right” order of poses. Choose your favorites and build a mini class around them. Over time, you will learn how to order your yoga postures effectively. However, your initial goal is getting on your mat and having some fun, not reenacting one of B.K.S. Iyengar’s books, pose for pose, page by page.
4. Cheat. Speaking of books, there are oodles of yoga resources to help you acquire the knowledge you need to fly solo, such as books, blogs, DVDs, magazines, podcasts, and more. For the study abroad trip I mentioned earlier, I left home with a yoga mat and Beryl Bender Birch’s book Power Yoga and returned a few months later not only comfortable practicing by myself but also leading classes for more than 100 of my peers, professors, and members of the school staff at once. If you feel adrift on your mat without an instructor, use a “cheat sheet” in the form of one of the above resources or a few notes written on a piece of paper until you get the hang of structuring a practice on your own.
5. Groove. As you know, different teachers and styles of yoga have different- often strong- opinions about playing music during class. Some see it as a crucial element for setting a certain mood or theme; others think it’s a crutch for both students and teachers. At home, none of this matters. First-time solo yogis usually benefit from playing music, as it encourages rhythm and provides another outlet for self-expression (not to mention drowning out the sound of your roommate playing bongos in the other room or the neighbor mowing the lawn). That’s right, if you want to practice yoga to Rihanna or The Red Hot Chili Peppers or The Rolling Stones, go ahead! Rock on with your bad yogi self.
Readers: Do you practice yoga at home? If so, what are some of your keys to solo success?
This entry was posted in Asana and tagged asanas, ashtanga, B.K.S. Iyengar, child's pose, Ganesh, half pigeon, Home Yoga, India, Om at Home, pascimottanasana, Rihanna, seated forward bend, seated postures, seated straddle, sivasana, sun salutations, The Red Hot Chili Peppers, The Rolling Stones, upavista konasana, yoga music. Bookmark the permalink.