Yoga at the Great Lawn: The World’s Largest Yoga Class

Thu, June 24, 2010 5 Comments
At 4:45 p.m. on June 22, 2010, Central Park’s Great Lawn is meditating on the evening ahead. Mostly, it’s quiet, even with sound-checks happening onstage and hundreds of volunteers convening at scheduled rendezvous points across the massive swath of green. The event’s featured yoga teacher, Elena Brower, needs to keep speaking so that the audio/visual team can adjust her mic. She talks to those around her, giving occasional shout-outs to nearby friends. She discusses logistics with a member of the event staff, “I won’t be doing the OMs. I’m going to introduce Dharma Mittra, and he’s going to do the OMs.” Then, she experiments with the verbiage of how she’ll announce Mittra, a yoga pioneer who’s been teaching in New York City since 1966. Even in rehearsal mode, she’s succinct, gracious, and real. 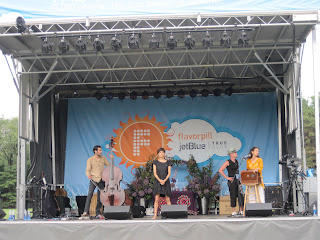 Photo: Sound-check with Elena Brower, Wah!, and others.
But, she’s a little nervous too. Understandably so. She’s preparing to teach the world’s largest yoga class, with more than 12,000 yogis registered to attend. To keep herself anchored and appease the guys in the sound booth, she continues her banter. She begins to recite a mantra—om namah shivaya—saying it repeatedly with various inflections and at different volumes. She’s not chanting but, rather, substituting the sacred syllables for standard sound-check lingo. She could say “testing 1-2-3” or recite her ABCs, but one gets the impression that Brower doesn’t care much for throwaway words. 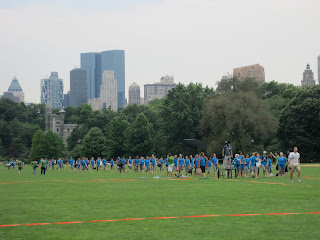 The cavalry of yoga assistants arrives at the Great Lawn.
It’s clear that things are going well as the event nears. By 5:30 p.m., the weather is cooling down (ominously so, we would soon discover). Volunteers, staff, sponsors, security, and media all seem to be coordinating nicely. I’m roaming between my posts as a member of the media, for OmGal.com, and an assistant teacher. I bounce happily from the press tent where I am offered interviews with a “celebrity yoga guru” per an earlier press release from her people (I have never heard of her) and obliged by Dharma Mittra for an impromptu photo, to the lawn to watch thousands of yogis take their places, unroll their mats, and prepare to make history. I tell Mittra he is free to sit or stand as he pleases for the photo, so the septuagenarian jokingly gives me a muscle-flexing move (a la the Governator). It’s so unexpected for a man of his stature that I’m not quick enough to capture it with my humble digital camera. My brain captures it indefinitely. Below, he strikes a more traditional pose. 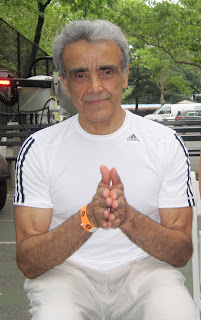 Sri Dharma Mittra
All around me, thousands of others are capturing the experience in their own ways. Some are dancing to the musical performances, while others limber up with a few asanas. Many take photos and talk with their friends—some they’ve just met while standing in line for the event. One woman wears a multi-color leopard-print body blanket of sorts and paints people’s faces, including my friend Daisy. 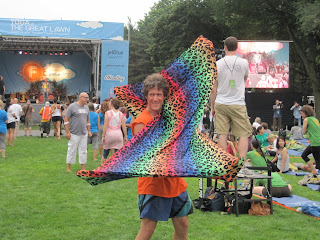 Yup, there’s a person in there. 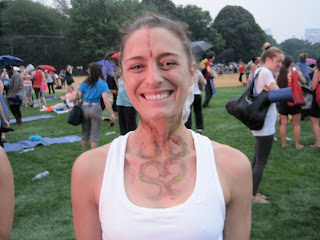 Daisy, who gave Om Gal a plug on NBC (I didn’t even pay her).
Reggie Watts, who’s equal parts musician, beat-boxer, comedian, and emcee, adds a party atmosphere, partially because he thinks he’s been asked to host the MTV Video Music Awards.
Buddy Wakefield, a slam poetry champion admits to being a little overwhelmed by the size of his audience. Presumably, he’s used to smaller venues (aren’t we all?), and now, he’s shining on stage beneath a news helicopter and before an audience that makes him feel “like Bon Jovi,” New Jersey’s chosen son. Wakefield dedicates one poem to “anyone’s who’s in it—the sticky tar pit of it,” which jars me from being a yoga teacher/blogger/media gal bouncing to and fro, to being an anonymous yogi among thousands, thinking to myself, “Yeah, who doesn’t know that sticky tar pit?” 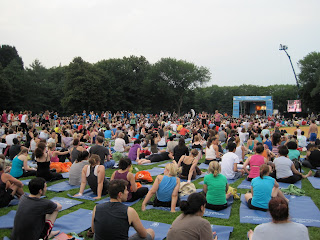 This feeling of being swallowed by a beautiful and powerful collective rises up again, when, under the threat of thunderstorms, Elena Brower welcomes Dharma Mittra to the stage around 7:15 p.m. to chant the OMs as planned. “Speak loudly, and do one OM because that’s all we have,” I overhear her kindly say to him from my perch below the stage. At the sound of this one unified OM, rising up from the lawn, toward the steamy, gray, ready-to-open sky, I can’t jot another note or snap another photo. I shrink down to the grass, amidst the real camera crews and journalists, join my hands in prayer, and, through a quivering chin and vibrating chest, I OM with everyone else.
It doesn’t matter than Brower makes it through only a few sun salutations before Mother Nature closes the curtain on the night’s yoga history making. It doesn’t matter that 13,000 people scurried home sheltering themselves from the downpour with their newly gifted yoga mats. It’s irrelevant that I went to dinner in pajamas because my clothes were drenched. And, nobody cares all that much about whether a world record stands or not.
It matters only that it can be done: a collective realization among a mass of modern yogis that no experience, event, song, sun salutation, mantra, or moment is ever a throwaway, and it takes far more than a thunder shower to dampen the yogi spirit.
To see more pictures of the event, visit facebook.com/omgalblog.
This entry was posted in Asana, Events and tagged asanas, Buddy Wakefield, Central Park, Dharma Mittra, Elena Brower, event, mantras, Om, Om Namah Shivaya, omgal.com, Reggie Watts, song, sun salutations, The World's Largest Yoga Class, thunderstorms, Wah!, Yoga at The Great Lawn, yogi spirit. Bookmark the permalink.