This Just In: Erin the Intern is Famous

Famous people like New York, and New York likes famous people.  Ask anybody who lives there to rattle off their most recent celebrity sightings, and you’ll hear about starlets in yoga class, gaggles of models at the club, the latest It boy or girl strolling the streets with a latte, or a professional athlete in line for the loo.  NYC Gal, a Gawker-stalker before Gawker existed, was sure to text me when the last one happened.  It was A-Rod.  She says he’s even prettier in person.

This week, however, was the first time a friend of mine, nay, ours, was the celebrity being spotted.  It’s true; Erin the Intern was recognized in New York City by an OmGal.com reader.

I don’t know all the details yet, as Erin is now too famous to call me. 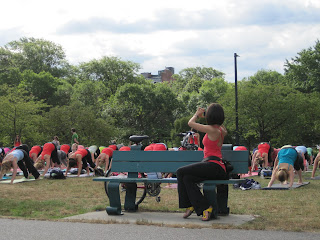 The best intern on the planet shooting the recent Salutation Nation event in Boston–probably the last time she’ll be on this side of the camera.  The paparazzi will be unbearable soon.

It made me wonder, though: If you could spend time with any celebrity yogi, who would it be? Lady Gaga (a new fan of yoga)?  Julia Roberts (a fan of Hinduism and star of Eat, Pray, Love, which debuts tonight)? Someone famous for being a nimble yogi: B.K.S. Iyengar?  Or, a karmic one: Mahatma Gandhi?

I can’t wait to hear your choices!