Thu, December 31, 2009 1 Comment
A few of the year’s highlights in this little yogified corner of the blogosphere . . . 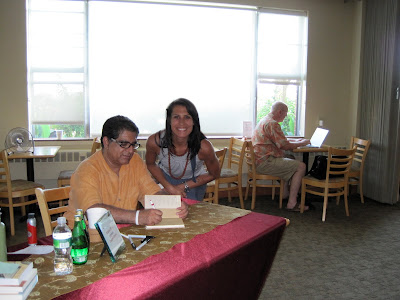 It started with a radio appearance at the end of 2008 when I went on Mariellen Burns’s show in Boston to chat about setting life goals and healthy intentions in 2009. It was great; I brought Mariellen an amaryllis plant; she joked about killing it on contact. We fielded questions from listeners and weighed in on everything from losing weight to finding a recession-friendly fitness program to starting a yoga practice and more. Then, some guy called in and went bat sh*t crazy on everyone. I’m not kidding. Click here to listen to the show.
Days after I enraged listeners, err, listener (singular), with my highly controversial statements regarding extremist ideas such as drinking plenty of water, we rang in 2009. I shared a post about making and keeping resolutions; President Barack Obama took office, and, soon thereafter, I took to the icy streets of Boston to begin training for my first marathon (Boston). Following my first 9-mile run through the infamous Newton hills, including the one they call “Heartbreak,” I went home and cried. I’m not sure if it was the icicles that formed in my hairline as temperatures dipped into the single digits or the realization that Heartbreak “hill” is actually a series of four punishing, sloping inclines that stretch on for eternity, but I was rattled.
Always the entertainer, Om Bro provided comic relief with a wellness inquiry of his own (from a post in late January):
Om Bro: How do 3 a.m. shots of whiskey fit into your 09 health and wellness plans for me? Me: Hmmm. By whiskey, do u mean “wheat grass?”
Om Bro: Sure, you can call it that.
Then, in February, I gave Cupid a piece of my mind.
In March, marathon training kicked into high gear, as did my fundraising for Fit Girls, the charity for which I ran. I co-hosted a party along with Lululemon to raise money for the running, reading, and community service programs that Fit Girls provides young girls, and I taught a Yoga for Runners workshop at A Little Yoga, one of many new studios that opened in Boston in 2009. Thankfully, I survived a 21-mile training run, the longest run of my life at the time, in the month of March. Check out the video footage of me- dazed and exhausted- icing my knees with frozen edamame. Resourceful , eh?
March also featured a helpful post called “Different Styles of Yoga Decoded;” it remains one of the blog’s most highly trafficked articles and prompted lots of great comments from readers.
In April, I ran the Boston Marathon. The whole thing. I wish I had a triumphant photo to share with you here, but honestly, I look like a half-tranquilized horse on the verge of vomiting in just about every one. You may recall my om gal-pal Christina declaring, “There are no hero shots [in the Boston Marathon].” For the record: She’s right.
In May, I revealed “Zen and the Art of Swimsuit Season,” went on the radio again (this time on The Frankie Boyer Show), raved about a fun yoga flick called Enlighten Up! by another om gal-pal, Kate Churchill, and . . . [insert drum roll, please] . . . spent a day in the presence of His Holiness the 14th Dalai Lama. Here’s the recap; photos and videos included.
Things heated up around here during the summer months. In June, I did my best Flashdance impression for a photo shoot for ShoestringMag.com, fielded a great question from a reader in Chicago about being a yogi and drinking alcohol, and got a little goofy in a video with one of my best yogi gal pals, fellow teacher Chanel Luck.
We also bid good-bye to Michael Jackson in June. May he rest in peace . . .
July delivered more insightful questions and feedback from readers, including how to handle grief through yoga. This post was picked up by the Boston Globe’s website, Boston.com, and featured on its homepage. I was very grateful, still am.
August went like this: I turned 30 and met Deepak Chopra on the same day. It was a life moment. Enough said.
September marked the 3rd annual Global Mala event, celebrated on the U.N.’s International Day of Peace. My BFF requested some fitness advice on how to edge out her family in their own version of the Biggest Loser, and I cried every time I tuned into the actual show, along with the rest of the country. (What, you didn’t sob at each weigh-in? Seriously? Have you no soul!).
I’ve neglected to mention it, but I started keeping secrets in October, such as the one about some new VIP private yoga clients on Boston’s sports scene. Shhhhhh. I also explained why yoga is safe for sore knees, who are some of yoga’s most influential pioneers, and what the heck yamas and niyamas are.
With November came a cameo appearance from Om Bro . . . and a spike in web traffic from OmGal.com’s female-skewed audience. Coincidence? Hmmm.

Yoga for Athletes from OmGal.com from Rebecca Pacheco on Vimeo.

We closed the year in December with healthy snacks for weight loss, a killer gift giving guide for yogi types, and correspondence from my recent trip to Kripalu. Thank you, everyone, for reading, commenting, asking questions, becoming a Fan on Facebook, following on Twitter, passing along your favorite posts to friends, attending my workshops and classes in Boston this year, and so much more. You are among my biggest blessings in 2009. Now, let’s raise a glass of kombucha, and set our sights on 2010!