A Day With The Dalai Lama 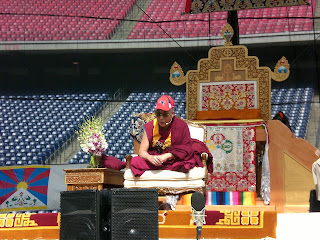 Following the Dalai Lama’s visit to Boston this weekend, the media’s coverage of the event, a two-part lecture held at Gillette Stadium, was largely relegated to posts regarding the above photo, wherein His Holiness donned a New England Patriots hat during the afternoon session. I can’t say that I blame them; it was pretty fantastic. The hat, of course, was a gift from Patriots team owner Robert Kraft, who happened to be sitting with his wife Myra, just a few feet away from me, so I snapped a shot of him too. 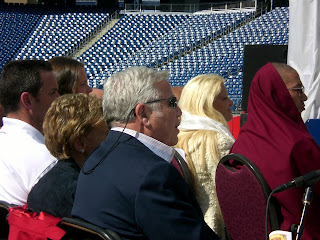 Nevertheless, there’s much more to be said about the Dalai Lama’s visit to Boston beyond the fact that he rocked a Pats hat. Yet before enumerating the day’s highlights, it probably makes sense to quickly recap who this man is. (Perhaps to provide some additional background information, making the first association in people’s minds, upon hearing his name, something other than, say, an infamous Caddyshack clip, which several pals emailed me last week). Sigh.
The Dalai Lama describes himself as a “simple Buddhist monk,” but he is also Tibet’s head of state and spiritual leader in exile. He has been in exile since 1959 (the Chinese invaded Tibet in 1949). On Saturday, he spoke of visiting a soup kitchen recently, describing it as an experience that he enjoyed. He relayed feelings of comfort and familiarity with the people in the shelter because, to hear him tell it, he too has been homeless, in a way, for the past 50 years. While he now lives in India, the Dalai Lama’s home unquestionably remains Tibet, a country still under Chinese rule. Throughout his lifetime (he is now 73 years old), the Dalai Lama has steadfastly dedicated himself to cultivating peace around the world.
In fact, the Dalai Lama joined the monastic tradition at the age of 6. A Buddhist Doogie Howser of sorts, you ask? 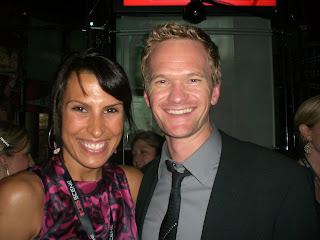 Not exactly. His Holiness the 14th Dalai Lama was more than a precocious 6-year-old; he is recognized as being the reincarnation of the 13th Dalai Lama, Thubten Gyatso, who was the reincarnation of the Dalai Lama before him and so on down the line. Each Dalai Lama is viewed as a manifestation of Avalokiteshvara, the bodhisattva of compassion and the patron saint of Tibet. Let me break this down further: He’s as close to a living manifestation of Buddha as you can get. 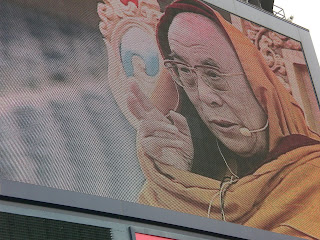 A college professor of mine met His Holiness once and shared the experience with our Buddhism in India, Nepal, & Tibet class. I can still vividly remember how her face changed and brightened as she recalled the encounter. Perhaps it was then that I became enthralled with the idea that I might share space with the Dalai Lama too one day.

Of course, it would have to be relatively soon, I thought. This man, the 14th, already looked pretty old, particularly relative to myself, a 20-year-old college student. If I missed my opportunity in his lifetime, I’d have to wait until the next Dalai Lama was discovered- a toddler no doubt, like his predecessors- and it would be decades before he acquired the knowledge and life experience of this Dalai Lama.
On Saturday, May 2, 2009, I took my seat on the turf of Gillette Stadium, for the first of two lectures by the Dalai Lama. I would be in the presence of this pivotal figure in history and an inspiring person in my life for several hours. The morning session covered the Four Noble Truths, followed by a break, during which the 15,000 attendees browsed the new shopping and entertainment complex of Patriot Place and enjoyed a Tibetan market; featuring clothing, jewelry, and other artifacts; as well as educational exhibits such as a replica of a traditional Tibetan home, the opportunity to have your name written in Tibetan, and the ability to dress in traditional Tibetan garb for a unique photo opportunity. 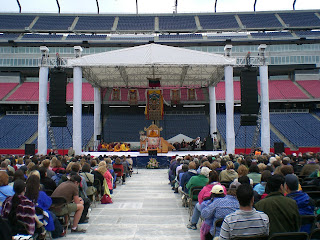 As you can imagine, it’s one thing to study the Four Noble Truths (the essential tenets of Buddhism) on your own or even in a college-level course; it’s quite another to have them illuminated by the Dalai Lama, in person. Just in case you’re wondering or your knowledge of Buddhist texts is rusty, here they are:

1.) Dukkha: Suffering exists.
2). Samudaya: The root cause of suffering is “thirst” or as His Holiness often referenced “grasping.”
3.) Nirodha: Suffering can cease; liberation from suffering exists.
4.) Magga: The Path, often referred to as the Middle Path, is the way to cease suffering.
Put simply by the Dalai Lama, “90% of all negativeness is mental.” In other words: Know that suffering and impermanence exist. Understand that your attachment or thirst for things to remain constant is misaligned with the essential state (i.e. truth) of the universe. Observe that you can liberate yourself from this cycle of dissatisfaction by choosing a different, truer, more moderate path . . .
Then, it got very windy in the stadium, and the world’s most famous monk became cold. 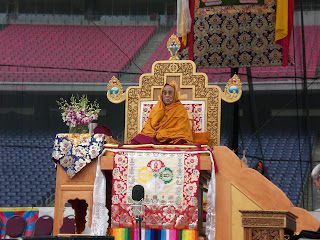 So, he implored us, in his charming, direct, albeit broken English, “If you have hat, I think you put on now,” which reminded me a lot of my Portuguese grandmother, as she would be inclined to say the same thing, in similarly broken English, with equal and genuine concern. He wasn’t referencing the aforementioned, amply-covered Patriots hat, and this remark surely wouldn’t make the papers the following day, but it made everyone in the audience smile or chuckle that morning. We felt, in some small way, that the Dalai Lama, viewed as the living incarnation of the bodhisattva of compassion, was looking out for us.
That is the magic of seeing this man in person. The compassion is palpable. No gesture is too small or tossed away. No laugh is conjured up for show. He does not seek to impress. He exudes peace and love but makes no demonstration of either. His language is simple and direct. He is simultaneously of this Earth- vulnerable to cold and wind, sun and heat (we had all four that day, as if to further illustrate the impermanent nature of all things)- and other-worldly. There is no perceivable filter between who he is and what he does. If he is cold, he pauses to drape his robes more snugly around his body. If the sun glared in his eyes, he readjusted the Patriots hat or rifled through his few material possessions to find tinted eyeglasses; he did this slowly, as if he we were not there watching. He states matters simply without oversimplifying or being sanctimonious. When asked, “What’s the one, single thing that we can all do to promote peace, he exclaimed, “I don’t know! Things are too complex; there’s no single thing.”
What a relief! What liberation! There is no easy fix, no magic bullet, no virtuous antidote. We’re all in this together, and everything that we do affects everything else. When asked how he might advise young people today, he did advocate for greater self-inquiry and reflection, instead of constantly distracting ourselves through sensory stimulators, such as TV, cell phones, music, etc. Take a peek; he even pantomimes iPod ear buds.

He was also quite frank about what makes him different, particularly in the afternoon session, with its focus on The Path to Peace and Happiness. “My calm mind makes me different,” he remarked plainly. He copped that he does not have any healing powers, else he would have avoided the gal bladder surgery he underwent last year. At this, he laughs. He’s thoroughly entertained by this fact. In this regard, he is no different from us, a human being just like all the other 6 billion human beings with which he shares the planet, equally incapable of cheating sickness or suffering as the rest.

In fact, this is just how he summed up the afternoon’s memorable public talk, “Everyone has [the] desire to have [a] happy life. [We are the] same . . . 100%. Same.”
This entry was posted in Events, Karma, Spirituality, Sports. Bookmark the permalink.