A mantra is a thought or intention expressed as a sound. These sounds include syllables, words, or phrases, which may or may not have their own translatable meanings.  ”OM” is the most popular mantra.

A mantra can be said aloud, repeated silently to oneself (as in meditation), sung with devotion (as in kirtan and bhakti yoga), or visualized in written form.  Many Sanskrit mantras, such as Om Mani Padme Hum, a central mantra in Tibetan Buddhism, are often captured in art, beautifully written or carved on stones and sculptures, or incorporated into clothing, jewelry, and talismans. 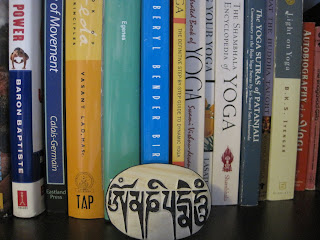 A yoga student and Buddhist friend of mine generously brought this stone back from Nepal last year; it features Om Mani Padme Hum (a mantra without direct, translatable meaning but believed to encourage enlightened awareness) on one side and the eyes of the Buddha on the other.  It resides on the bookshelf above my desk, where I write.

Mantras anchor the mind during meditation, soothe or energize the body in times of physical challenge, and connect the soul more deeply to God or spirit.

And yogis aren’t the only ones to incorporate mantras into their lives.  Athletes, for instance, often use mantras or affirmations to improve performance, which is nicer than steroids, don’t you think? World-class distance runner Kara Goucher chooses a new word while training for each race.  Words like “confidence” and “fighter” helped Goucher maintain focus in grueling races at the 10,000 meters and marathon distances last year, according to an article in the March 2010 issue of Runner’s World.

I’m not running any marathons this week, but I’ve chanted Om Namah Shivaya and repeated Catholic prayers under my breath, over and over, on multiple occasions.  It isn’t intentional, which is the interesting part, and I realize, now, how much the brain craves the structure and repetition provided by mantras, especially in difficult times, such as the loss of a loved one.  For me, it’s been one small, silent outlet for staying calm and remaining present.

Do you use mantras, as a meditation tool, coping skill, or sports performance enhancer?  What are your favorites?