In what you might call the Battle of the Beautiful Quarterbacks (also known as the New England Patriots vs. the New York Jets game), Tom Brady’s team fell to  Mark Sanchez’s 28-14 yesterday.  Despite the Patriots’ loss, there was much rejoicing on its practice field, in the Dana-Farber Field House.  Sadly, this had nothing to do with football*. 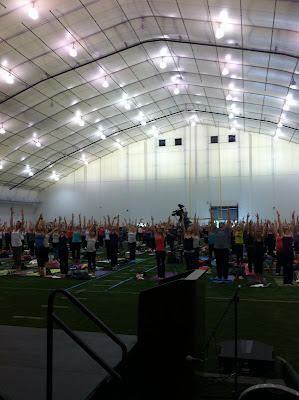 I was honored to emcee the whole event and teach during the morning session’s Global Mala celebration.  Boston has participated in this worldwide yoga event (the brainchild of Shiva Rea) since its inception four years ago.  10 of Boston’s favorite teachers treated yogis to a 108-minute practice that included everything from Vinyasa, to Hip Hop, to restorative yoga.  The featured instructors were (in order of appearance): Brian Lam, Chanel Luck (co-creator of Global Mala Boston), Me, Jacqui Bonwell, Roberto Lim (co-creator of Global Mala Boston), Lynne Begier, Christine Raffa, Amy Leydon, Bo Forbes, and Bonnie Argo.  Here’s a video clip from Lynne’s Hip Hop Yoga sequence, to one of my fav running songs.  It still makes me think of Heartbreak Hill whenever I hear it (but, in a good way) . . .

Global Mala concluded with music as well, though, not the hip hop variety.  Daphne Tse performed an interlude during sivasana, followed by a set of kirtan chanting before lunch.  After lunch, Ana Forrest, creator of Forrest Yoga, took the stage to lead a challenging, heart opening, thigh scorching, toxic energy releasing practice.  She began the class by invoking the spirits of all four directions: North, South, East, and West (Ana derives much inspiration from Native American culture and philosophy).  I thought you might enjoy seeing a portion of the sacred ceremony.

In between my emcee and teaching duties, I still found time to enjoy the company of my fellow yogi friends (new and old), soak up the experience of being at Gillette, and goof off a bit.  Shocker, I know . . . 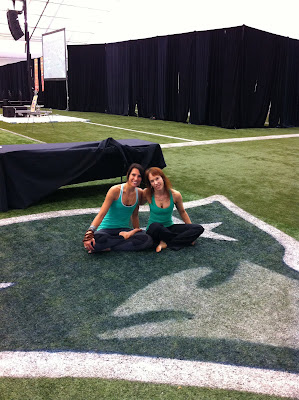 Fellow Boston-based teacher Bo Forbes and me.  (The matching outfits were an accident). 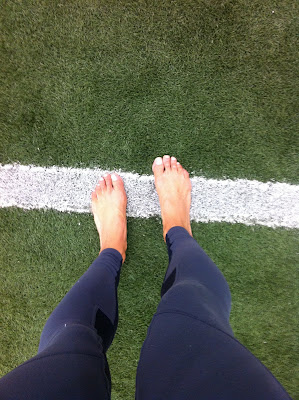 Feeling the turf between my toes. 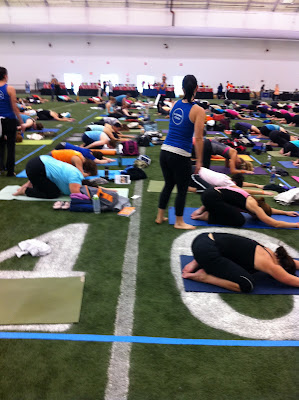 The event concluded with another stirring musical performance and guided meditation by kirtan and indie-pop rock performer Wade Imre Morissette.  Keep an eye out for his forthcoming movie musical, “Ultimate Boon,” shooting in India soon. 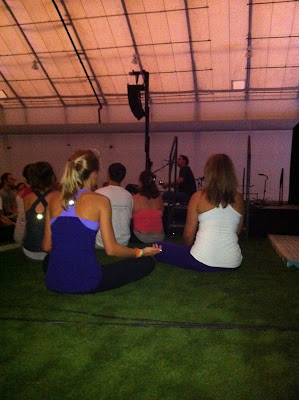 Finally, it was time to go, and the gratitude among us was profound.  The event’s key organizers, all inspiring women whom I am proud to call my friends: Chanel Luck (left), Bonnie Argo (not pictured), Sarah Gardner (center), and Laurin Panzano (right), took the stage. 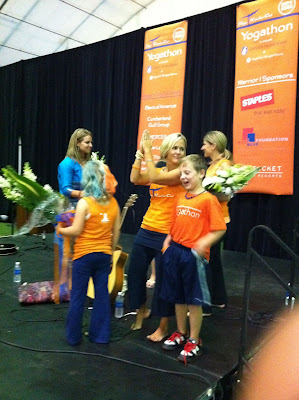 Tomorrow, the New England Patriots reclaim their practice field, and I can’t help wondering if there will be some residual love and gratitude in air.  We’ll have to ask Tom Brady . . . For more photos of the event, please visit the OmGal.com Facebook fan page, Facebook.com/omgalblog.

*I fully acknowledge that there are certain subjects about which I cannot be neutral and unbiased.  Among these are: Boston sports teams (staunchly loyal), yoga (constructively critical), and mayonnaise (I hate mayonnaise of any kind).