The Skeletons in My Closet 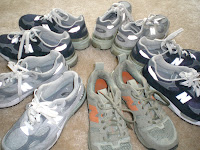 I’ve had a long-standing love affair with sneakers, beginning with my first pair of Reebok “princesses” in the fourth grade. They were gleaming white with raspberry trim and- in my mind- transformed me from a school girl playing at recess to an aspiring athlete, turned loose. These were not the casual tennies of gym class; these were Running Shoes, expertly crafted for competitive, organized sports.

By the time I started running track in high school, my sneakers and I had formed a unique bond. Choosing each new pair required an artful balance of aesthetics, economics (Mom and Dad were footing the bill, excuse the pun), performance, and fit. I flirted with several brands over the years, mostly in the name of frugality. Sure, I wanted Nike Airs from the jump, but I had to wait a year or two, and in the meantime, I opted, instead, for sick Adidas trail runners. Was I running any trails? No. Did I care? Negative. To me, the science of shoe-buying was thus:

Several years ago, one brand and model usurped all the rest. After a photo shoot for New Balance, I gratefully trotted home with a few pairs of sparkling new running shoes as a thank you on behalf of the Boston-based company. From then on, I was sold. The company makes plenty of flashy, high-tech designs, but I’ve remained loyal to the brand’s cult-favorite 992, which possesses a retro vibe that I adore. It’s largely made in the U.S., and it’s sturdy as heck. What’s more, it kept me blister-free during last week’s 2009 Boston Marathon. I’m told it’s not an ideal shoe for marathoning; the durability translates into added weight (so that’s my excuse: had I been wearing lighter shoes, I would have been chasing down Kara Goucher). Nevertheless, I love this shoe. I love it like Carrie Bradshaw loved those “never been worn” Manolos, which eventually proved to be the catalyst for her reunion with Big (spoiler alert!) in the Sex and the City movie.

Like Bradshaw’s swank Manolos, my throwback New Balances inspire more than strutting or striding; they make me feel more like me. Last year, I had a fling with a pair of Nike Air Shox, and it was exhilarating. They were exciting, sleek, and trimmed with metallic gold touches. They looked so fast that I would barely glance in their direction and feel the air whoosh past. However, the luster faded quickly, and I trotted back to my old faithfuls.

Together, we greet frigid mornings in Southie and dusky warm nights along the Charles. We notch yet another Falmouth Road Race each summer and lined up in Hopkinton last week to participate in one of the most storied athletic events in the world. We are one part gradeschool gal playing carefree at recess, one part serious athlete on the loose.

How could I trade that in?

(Photo: My closet, where retired New Balance sneakers go to die). Have a piece of sporty gear or yoga apparel that you can’t live without- spill it! What’s in your closet?

This entry was posted in OG Loves, Sports, Style. Bookmark the permalink.