The Worst Kept Secret Ever

OK, the jig is up . . . I tried to be coy.  I plotted creative ways to tell you.  I even filmed a quick video clip in the restroom of Crossroads, an Irish bar just past Kenmore Square at which runners in training for the Boston Marathon gather before and after a weekly 9-mile run on Thursday nights.  The clip, as you might expect, was more unbearable to watch than an episode of the Real Housewives of Orange County.  Seriously, this site has standards, and a shoddy video clip set against a grafitied bathroom wall proclaiming, “Smoke crack; worship Satan” falls short of said standards.  The point of the video clip was to contrast a somewhat shocking, eyebrow-raising visual message with a not-so-shocking message of my own.  So, here goes: I’m running the Boston Marathon.  (For the record, I think smoking crack and worshipping Satan are really bad ideas). 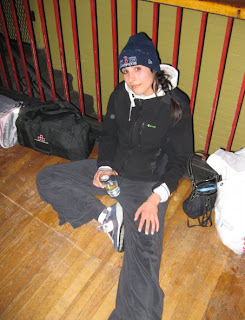 [Above, following my first Crossroads run in January.  Temps plummeted below zero that night. I may look somewhat docile, here, but the truth is I went home and cried].
Thus far, my announcement to run the most storied marathon in history has stirred zero surprise from anyone other than myself.  Except maybe my mom, who looked only slightly less spooked than if I told her I was becoming a polygamist.  Surprise quickly gave way to anxiety, prompting mom to insist- rather gravely- that I start eating chicken regularly. As in, this was the first thing that came to her mind!  As in, I could be laying in a gutter at the bottom of Heartbreak Hill on race day and you know what will save me?  A plate of buffalo wings.  If only it were that simple . . .
At times, I figured if everyone is already under the impression that I’ve run the Boston Marathon- nay, ANY marathon, then there should be no need to actually run one.  How easy is that?  Alas, there’s no street cred in dodging a challenge, hoping people believe you’ve done it anyway.  For me, it was high time to pull the trigger on a milestone that’s intrigued and inspired me for years.  And, admittedly, there was a healthy dose of peer pressure involved, with a few glasses of red wine at Sel de la Terre eventually sealing the deal.  As I sat with three other gal pals (two of whom were on my Reach the Beach Team), conversation turned to foot races of the 26.2-mile variety, and it was discovered that two of us had run, and two of us had always thought about it.  Thus, the adventure began.
Why keep it on the DL until now, you ask?  This is a yoga-inspired blog, and I thought it unfair (and potentially booooring) to flip the switch on you and start blathering about electrolytes and the ingenuity of the Garmin.  I delayed my marathon announcement on OmGal.com (relegating notes and insights on my training to my Twitter feed only) to spare you many of the mundane details, such as running over sheets of ice in January, with icicles forming in my hairline from the sweat accumulating under my winter hat; the spike in my appetite in February, fierce enough to start a fist fight if not sated; or the fact that in March I discovered I’m running in the most non-runner sneakers on the planet, designed more for gym teachers in VT in the 70s than marathon distance runners, but it’s too late to change and risk throwing off the delicate balance of training. 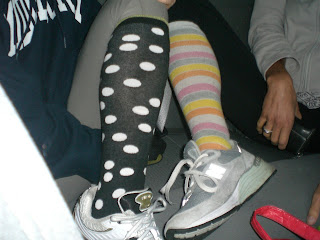 [I've worn the same model of New Balance sneakers for years- a little clunky, but I love them].
Speaking of balance, I’m hell “bent” on maintaining my yoga practice through all this. Granted, it doesn’t look or feel as pretty these days, but I would have quit this whole ordeal weeks ago without it.  My asana practice keeps me kink-free and helps quiet the incessant doubts in my mind: I can’t do this; I don’t have time for the training; this is insane. I also surely would have quit without the running pals, old and new, who have encouraged and educated me on how to safely train for your first marathon.  Finally, I’m running for a great cause, a program that combines reading, running, and community service for young girls to promote health, self-esteem, and teamwork.  Sports and a love of reading are in my blood.  They helped me through the difficult years of being a pre-teen and teenager, so if I can help pass that positive experience along to more girls in grades 4 and 5, then I will.  Stay tuned for more information on my March 22 Yoga for Runners workshop at A Little Yoga in Wellesley to benefit FitGirls.
For now, though, I have to go for a run.
This entry was posted in Events, Fitness, Sports. Bookmark the permalink.