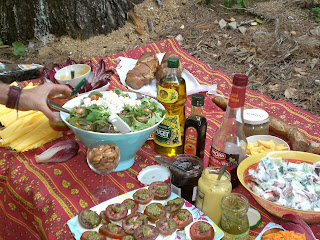 Upon returning home from France yesterday, my cupboards were bare, but my legs were craving a jog, having been confined to an airplane seat all day. Thus, I bypassed grocery shopping in favor of a run. South Boston put on her finest last night with a sunset over Castle Island to give the sunrise I experienced along the Seine that morning a run for its money- in its own spectacular (albeit slightly less sophisticated), orange and violet hued way. After which, I returned home longing for a home-cooked meal.

In general, French cuisine, while a gastronomic delight, often fell short in the produce department (in my humble, veggie-loving opinion). After several evenings featuring looooong dinners that languished into the late-night hours, retiring us to bed with bellies full of wine, bread, “amuse bouche,” soup, elaborate entrees, cheese, more bread, “pre-dessert,” dessert, tea, and coffee, I found myself daydreaming about un-fussed food sans all the expert tinkering. Once, while preparing a midday picnic along our daily biking route (see produce-packed photo above), I caught myself chopping and popping cucumbers into my mouth as if they were bon bons. I don’t think these cucumbers were any more extraordinary than cukes from the States, but my foray into uber-fancy eating on a nightly basis made me relish the fresh, uncomplicated crunch of what might be considered a typically ho-hum vegetable anywhere else.

Therefore, well before touching down on the tarmac at Logan, I was mentally concocting my first state-side meal. The aforementioned evening jog limited my options, as I didn’t have my standard fridge full of produce with which to work. Yet, with scarcity being the mother of invention and all (particularly in the kitchen), I whipped up an easy soup that I think you might enjoy this season. It made for the perfect post-run, welcome home, veggie-friendly, oh-so-simple meal.

Start with the stock of your choice (i.e. vegetable or chicken). Given the state of my paltry pantry, I opted for the canned version last night, to which I also added water.

Add 2 peeled and halved (large) sweet potatoes. [Option: adding chicken or turkey chourico, here, adds protein and an added kick of flavor but is, of course, optional]. Bring to boil.

Once the potatoes are fully cooked (to the point of softness), remove and place in a large bowl. [Remove the poultry as well, if applicable].

Add 1 can of black beans to simmering broth.

Mash potatoes and puree if desired. Add mixture to broth, along with cumin, chili powder, fleur de sel (salt), and black pepper. (I used about a 1 tsp. cumin, a few dashes of chili powder, and salt and pepper to taste).

Slice poultry and replace in soup.

Voila! Serve with a side of short-grain brown rice, and you have a perfect, fall meal, chock full of vitamins and seasoned with a little spicy zing. For an added dose of crunch, I served peeled and sliced cucumbers with olive oil and balsamic vinegar as an appetizer, and they were, put simply, magnifique.

This entry was posted in Uncategorized. Bookmark the permalink.